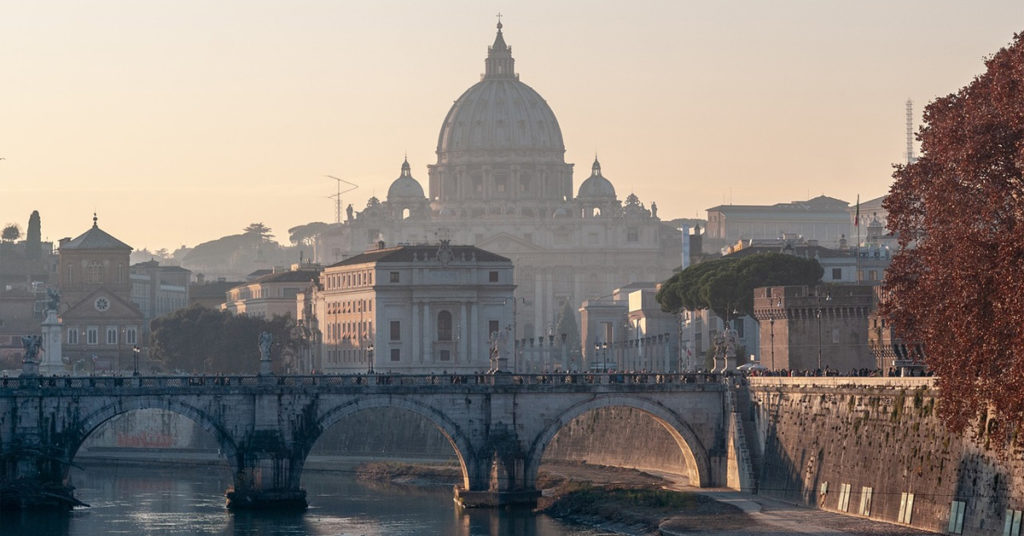 ‘All roads lead to Rome’, so the saying goes. That was true at the height of the Roman Empire, almost 2,000 years ago, and travellers, pilgrims and traders have continued to flock to the city from around the world ever since. With a history stretching back more than 2,800 years, no wonder Rome has been known for two millennia as ‘The Eternal City’.

The Roman Empire was one of the greatest civilisations of all time: from its centre in Rome, its rule stretched across the Mediterranean to Northern Africa and parts of the Middle East, and Western Europe as far north as England.  After the Empire fell in 476 AD, Rome became one of the most important cities in Christendom, the home of the Pope to this day.

During the Renaissance, Rome continued as a vibrant capital for the arts, education, philosophy and trade. And in the 17th, 18th and 19th centuries, wealthy, young English aristocrats and ladies on their Grand Tour flocked to learn about ancient Roman culture, Renaissance art, philosophy and architecture.Largely untouched by WW2, Rome once again became fashionable in the 1950s and 60s, when numerous glamorous and popular films, such as Roman Holiday and La Dolce Vita were filmed in the city. Hollywood stars such as Audrey Hepburn, Gregory Peck, Federico Fellini and Anita Ekberg made Rome their homes, especially along the elegant and luxurious Via Veneto, where most of the chicest and grandest of all Roman hotels are still found.

Today, Rome is one of the most visited cities in the world – and the second-most visited city in the EU, after Paris – receiving an average of 7-10 million tourists each year. Rome also has the most monuments of any city in the world, and it is the abundance of its rich archaeological, architectural and art treasures that continues to draw visitors (back) to the Italian capital. Within Rome’s small historic centre, visitors will find monuments to the might of ancient Rome, the Vatican, Renaissance palaces and Baroque churches, as well as magnificent museums and art galleries, aqueducts, fountains, piazzas, beautifully laid out ‘villas’ (parks) and breathtaking panoramic views.

The Colosseum in the historic centre (Centro Storico) is undoubtedly the most iconic of Imperial Rome’s buildings and one of the most visited places in the world. Completed after 8 years in 80 AD it was initially used to hold mock sea battles, before becoming an arena for gladiatorial contests, animal hunts, executions, battle re-enactments and dramas based on Roman mythology. Capable of holding up to 80,000 spectators, the Colosseum is the largest ancient amphitheatre ever built and remains to this day the largest standing amphitheatre in the world.

Just to the west of the Colosseum lies the Forum, a rectangular plaza surrounded by the (substantial) ruins of many of the oldest and most important government buildings, and for centuries the centre of daily life in ancient Rome. This was the setting for public speeches and elections, triumphal processions, gladiatorial contests and criminal trials. Above all, the Forum was the trading centre of Rome and its vast Empire – the most celebrated meeting place in the world.

Other notable sights nearby include the presidential residence in the Palazzo del Quirinale, the Trevi Fountain, Rome’s best preserved pagan temple-turned church, the Pantheon, and the city’s finest display of Baroque art at the Piazza Navona.

On the other (western) side of the River Tiber, is an even greater visitor attraction, although it’s the world’s smallest country. An enclave within Rome, Vatican City occupies just one-fifth of a square mile – smaller than Royal Victoria Park in Bath – and has a population of just over 800. The headquarters of the Roman Catholic Church and home to the Pope, the Vatican is dominated by St. Peter’s Basilica, the most renowned work of Renaissance architecture and the largest church in the world.  The basilica is approached via St. Peter’s Square, the first section of which is actually oval, and has at its centre an Egyptian obelisk of red granite that was moved to its current site from the Circus of Nero in 1586.

Stretching across the far side of a square recessed in the giant colonnades that surround the oval section of St Peter’s Square stands the façade of the basilica itself. The basilica is cruciform in shape, with an elongated nave. Its interior dimensions are vast when compared to other churches, and the central space is dominated by one of the largest domes in the world. It is this dome that dominates the skyline not only of the Vatican, but of Rome too.

Catholic tradition holds that the basilica is the burial site of Saint Peter, chief among Jesus’s apostles and the first Bishop of Rome (i.e. Pope). Saint Peter’s tomb is reputedly directly beneath its high altar, and for this reason alone, many subsequent popes have been interred at St. Peter’s from the Early Christian period. St. Peter’s is famous as a place of pilgrimage and for acts of public worship throughout the year presided over by the pope that draw audiences over 80,000 people.

The public museums within the Vatican were founded by Pope Julius II in the early 16th century and house a treasure trove of iconic art and architecture amassed over the centuries. In all, there are 54 galleries today containing approximately 70,000 works of art, of which about 20,000 are on display. These include several of the most renowned Roman sculptures and most important masterpieces of Renaissance art in the world, as well as the ceiling of the Sistine Chapel painted by Michelangelo and the Stanze di Raffaello decorated by Raphael. In 2019, the Vatican museums were visited by almost 7m peoples, making them together the third most visited art museum in the world.

To the south of the Vatican is Trastevere, a delightful district full of narrow cobbled streets and peaceful plazas that served as the inspiration for artists such as Giorgio de Chirico, and is now arguably the centre of Rome’s artistic milieu.