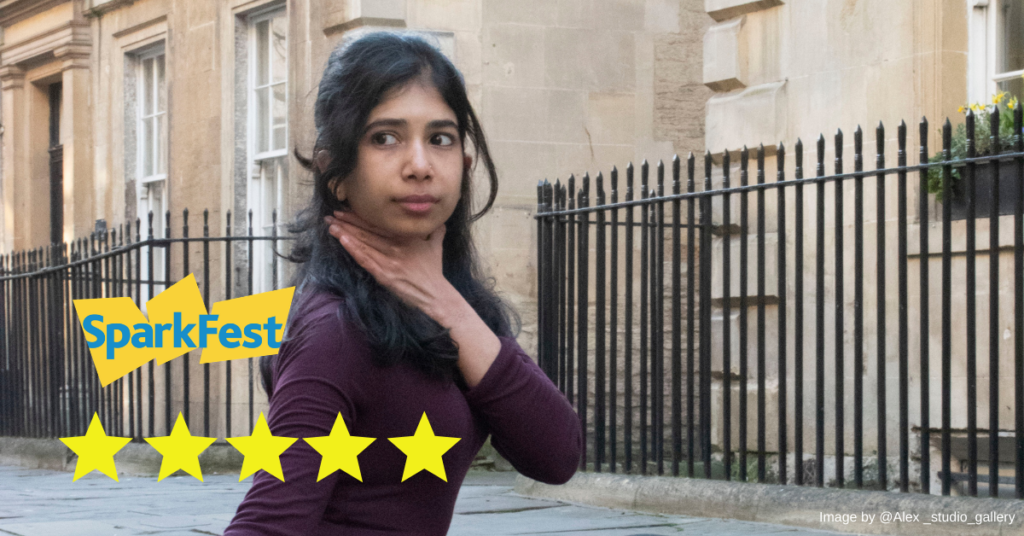 Mirage by Divija Melally was a powerful exploration of discrimination and violence against women told through a fusion of the classical Indian dance bharatnatyam, and contemporary dance. Melally gave an incredibly thought-provoking performance driving home the divide between worshipping a goddess and killing off female children out of cultural pressure to have sons. The piece beautifully explored the gap in which women find themselves in a society that doesn’t seem to want them yet endorses equal rights for all.

Alongside the fusion of movement styles, Mirage also involved text and chanting, which is traditionally done by a vocalist in bharatnatyam performance. In the piece Melally took this a step further and did the chanting herself, at one point whilst standing on her head! At the core of bharatnatyam are the mudras: intricate hand gestures and shapes that each symbolise different meanings in order to express a story through movement. Though I, as a viewer, do not know the meanings of any of these symbols there was still clearly a story being told that was conveyed with such intensity I didn’t feel I was missing out.

It seemed very appropriate that such a protest of violence against women was performed through two dance styles that greatly involved women in their history. Contemporary dance came from a rejection of the traditional values of ballet and a post-modern desire to humanise dancers in performance, pioneered in the majority by women. Bharatnatyam was banned by the British colonisers in 1910 as they wrongly assumed female temple dancers were harlots, which caused mass protests against the cultural discrimination and loss of such an ancient art form.

Melally’s intelligent performance conveyed the anger and confusion of feeling unwanted by a society that worships and sexualises women, whilst having to fight for a place in the world. Her delivery of the piece was beautifully precise, intense and human – a truly sophisticated performance from an up and coming dance artist.